Preparing for the US National: An Interview with 12-Time Champion, Alasdair MacRae

With the National starting in 3 weeks, I thought it would be fun and insightful to interview Alasdair about his preparation process, advice to open handlers and some secrets to his success!

Patricia: You’ve won the US National a remarkable 12 times with 6 very different types of dog. Do have a single formula for how you prepare them?

Alasdair: In general, yes. All my dogs are trained in the same system or method, with an emphasis on balance point. I first cultivate my dogs enthusiasm and enjoyment for working and it’s only later in their development that I focus on their width, pace, shape of flanks etc.
Within the system there is always room for addressing the individual dog, such as those with eye, sensitive dogs, etc. but the fundamental premiss of fostering a dogs desire and enjoyment for work is the same and it allows me to help them be the best dog they can be. They are all similar in this respect.

Patricia: Would you outline your timeline for preparing and a bit about your process?

Alasdair: I generally begin preparation about  90 days in advance and the first part is backing off training of my Open dogs and not putting my dogs in situations that demand precision but instead, getting them to relax in their work.
This includes leaving them to work on their own quite a bit as well as doing chores such as putting the sheep through the foot bath, weaning the lambs, etc. I also start running them to keep them fit.
If I do trial during this time I don’t get too disappointed if they don’t run as well as I’d ideally like, as I have not prepared them.
This ‘fitness’ period lasts until 6 weeks prior to the Finals and includes double-lift work.

Patricia: What exactly, what do you mean by ‘double-lift work’?

Alasdair: I set up situations at home to make certain both dogs are competent turning back to the left & to the right. I am especially working on it with Tod this year (owned by Andrea Anderson).
For my own dogs, I introduce the foundation for the turnback when they are young and eager to learn fun, new things. I perfect their skill as they mature.

Preparation is paramount. As you know yourself, for the big time as well as Saturday trials, they may not be won on the training field, but they can be lost there.

Patricia: To that end, do you also practice the international shed?

Alasdair: Shedding out our lambs from the ewes or shedding out our training sheep from the flock suffices for the dogs I am running just now but if I didn’t have chores, I would certainly practice a little.

Patricia: How do you alter your preparation from the 6 week mark going forward until the start of the National?

Alasdair: From 6 weeks-3 weeks out, I go back & make certain stops are in place, call on pace & square flanks if necessary, shedding, penning and focus on the ‘control’ side of things a bit. I keep up with a reasonable amount of fitness during this time, mostly running.

In years past, from 3-2 weeks out, I like to get in one or two trials and begin to let the natural dog come more into play. This year is different in that I haven't been able to travel due to back issues. Im hopeful I’ll be able to make the trip to VA and I am preparing as much as my back allows, but it may not be in the cards this year.
One week prior to the start of the National I like 5 days on good sheep to work on any training problems.

Patricia: When you set up the time line, how do you adjust for travel days?

Alasdair: That is one of the big problems when traveling for more than 2 days; you need access to reasonable sheep. If the sheep are not suitable, you may be better off not training as it may cause more harm than good.

Patricia: Knowing how the sheep vary so dramatically from California to Colorado to Virginia, do you adjust your training to suit the sheep?

Alasdair: I feel that if my dogs are running well & listening well, that we will be competitive, provided the sheep are reasonable.
For a trial like the Bluegrass, where a natural fetching dog does better than a micromanaged dog, I can & do prepare specifically for the sheep.
For the National, it is more difficult as they sheep vary quite a bit.

In 1997 & 2001 the sheep in Oregon were what I consider, light to wild in the qualifying rounds but in 2006 & 21012, the sheep there were heavier and more determined.
In Virginia in 1999 the sheep were extremely heavy as they were part of a grazing project yet in 2013 there weren't as heavy, however, there was a significant draw to the night pen which made them pull to the left hand side of the field on the fetch and on the left hand drive, which was testing.

Rather than preparing for specific sheep, I focus on preparing my dogs to run different styles. This gives me the option of running stop & flank, running a more natural ongoing style or a running with controlled pace. The ability to adjust styles allows me to adapt the specific sheep I draw and gives me my best chance of making it through the qualifying round.

Patricia: You were specific that the outlined preparation was for your Open dogs. What do you do to prepare your Nursery dogs?

Alasdair: I don’t have a formula for preparing my Nursery dogs as I don’t believe in putting too much on them too young.
Young dogs are all so different in their development. I especially do not make them walk or square flank as it affects their future training and longevity.
I usually run my young dogs flank & stop and don’t start putting polish on them until their 3rd year.
The best dog I have had, Nan, could hardly get around a moderate size course as a Nursery dog yet, won the Supreme International as a 3 year old.
The dogs that I have won the Nursery Finals with were early to mature.

For the Nursery, I take the dog along at the speed that is best for him or her and put my own ambitions aside. ‘Nursery’, as the name suggests, is an environment that develops & fosters, be it children, trees or young dogs. It is not where a handler should finalize training but instead where the foundation should be laid.

Patricia: What advice would give to someone participating in their first National?

Alasdair: Don’t try to win the qualifying! Try to make all of your panels and get finished in a reasonably tidy fashion.
40th place will get you through to the next round in exactly the same position as 1st .

Patricia: This will be the 19th National you have competed in and you have won it 12 times, do you still get nervous at the post?

Alasdair: Yes, I still get nervous, as I do at most Saturday trials but only a little more so. I think nerves heighten concentration which helps me perform at my best. I’ve always thought if a handler is not nervous, it doesn’t mean as much to them.

Patricia: Having done this for so many years, what does the National mean to you?

Alasdair: The National is the largest and most important sheepdog trial in North America and the pinnacle of each trial season.
You are placed in a pressure situation competing against the very top handlers and if you are fortunate enough to make it through to the Final, and shut the pen gate on the 5 ribboned sheep, for a few seconds, it feels as though you are floating on air……….

Posted by MacRae Sheepdogs at 7:19 AM 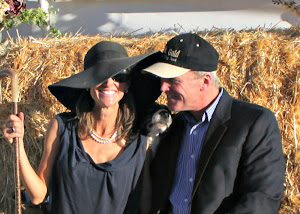 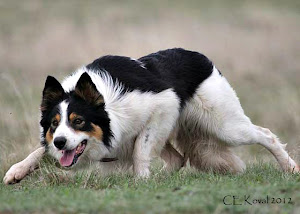 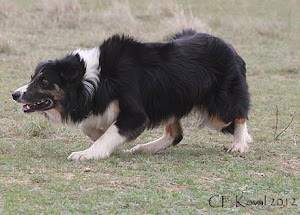 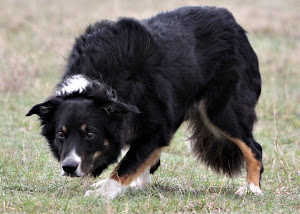 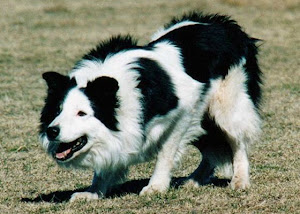